March 12, 2019General by NaijaMemoirsLeave a Comment on 10 Fascinating Facts About The Human Body [Final Part] 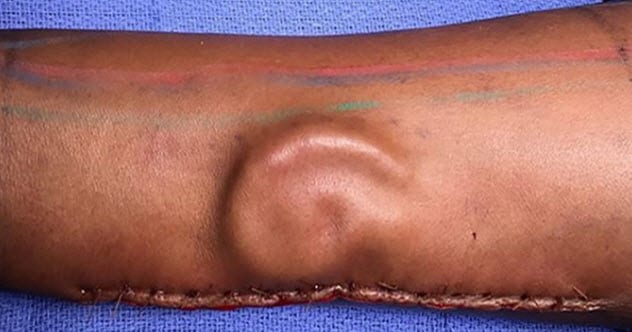 Photo credit: Smithsonian Magazine
When army private Shamika Burrage returned from leave in 2016, a car accident put her in rehabilitation for months. She also lost an ear. After Burrage recovered, her appearance bothered her so much that a counselor suggested plastic surgery.
In 2018, the William Beaumont Army Medical Center in Texas performed a rare procedure. They took rib cartilage from Burrage and shaped it like an ear. Afterward, it was inserted under the skin of her forearm. For the woman to experience feeling in the ear, doctors needed the new body part to develop fresh arteries, veins, and nerves—all available from the arm.
Once ready, surgeons replaced Burrage’s missing ear. Doctors also took the opportunity to reopen her hearing canal to restore the hearing she had lost. This was the first time that army plastic surgeons had performed this type of operation. However, the procedure dates to the early 20th century. Back in the day, rib cartilage ears were also grown under the skin but without the nerves and blood vessels. 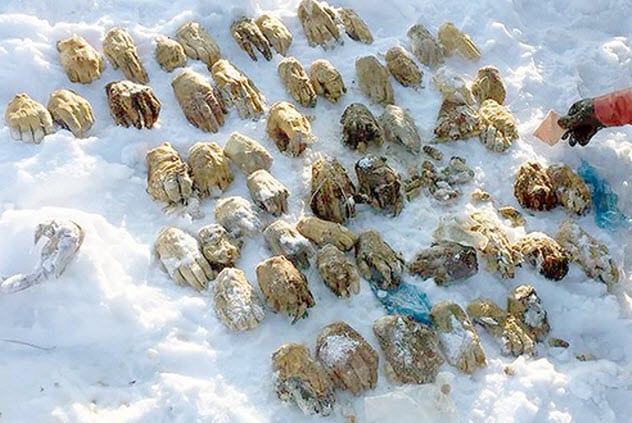 Photo credit: Live Science
Early in 2018, a fisherman decided to visit a small island near the Amur River in Siberia. Upon arrival, he noticed a hand in the snow. There was no sign of the rest of the body. Soon afterward, the man found a bag stuffed with the same grisly thing. All told, there were 54 human hands severed at the wrist. There was also medical waste nearby.
Social media cried foul after an anonymous sender circulated the photos online, showing the brutal cache in detail. The Russian government was unfazed. Investigators insisted that the amputations had a mundane explanation. Some forensic laboratories in Russia dispose of bodies without identities but keep the hands as a record.
In this case, authorities admitted that the unidentified laboratory broke the law by dumping the hands. Despite lifting fingerprints from only one pair, investigators also kept insisting that the hands were not the result of darker criminal activities.
Culled From Listverse.com

Did you know that your skin is the biggest organ on your body? Your skin often gives you hints into your vitamin and mineral deficiencies. Your body could be craving certain essential vitamins for glowing skin, but also make your body feel better as well. You think you may be nourishing your skin by drinking […]

If you have a problem with excess fat, this recipe is for you. Due to rapid lifestyle, poor diet, lack of physical activity, increased fat in the blood are the disease of today. Sometimes at elevated fat can be observed deposits of fat in yellow in the form of plate or node on the upper […]

All we want to reduce the wrinkles and to slow the aging process so badly. And the most of us use different creams to achieve that, but after reading this article you will throw away all your creams at home. In this article you will read about ingredients that will provide you even better results […]