January 5, 2019Literature by NaijaMemoirsLeave a Comment on Literature: Queen Amina 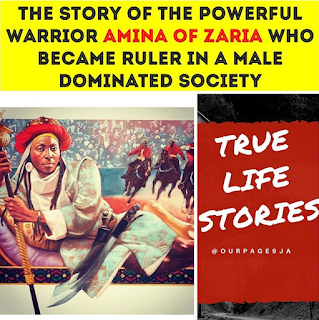 According to reports, the warrior Queen was born to a wealthy ruler, Bakwa of Turunku, in the year 1533 and they lived in the city state of Zazzau. Her family made a fortune from trading in cloths, salts, kola, imported metal and horses.
During her father’s reign, Amina spent time training with the soldiers of the Zazzau Calvary as she honed her fighting skills. She eventually emerged as the leader of their army.
The Bakwa of Turunku later died in 1556 and his throne was conferred on his son, Karama. He also died after ruling successfully for 10 years.
During his tenure, Amina became a well-known warrior and she was able to emerge as the ruler after his death. 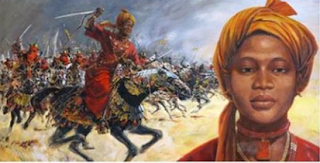 Queen Amina led her first military expedition only a few months after she became ruler and during her reign, she led an army of about 20,000 men as she conquered many territories.
She became an accomplished warrior ensuring safe passage for Zazzau and other Hausa traders throughout the Saharan region, conquering all the towns as far as Nupe in the South. At a time, she dominated the entire area of Kano, Gabir, Katsina, Daura, and Rano and became a threat to Nations in the Western Sudan and Mali.
The Warrior Queen brought numerous wealth to her kingdom as she introduced metal armour to her army for the purposes of warfare in Hausaland, including iron helmets and chain mail as well as building fortification around Zazzau and her military camps, some of which endure till today. The practice of erecting defensive walls gained currency all over the Hausa states and these walls are known today as Amina walls. She expanded the territory of the Hausa people of North Africa to its largest borders in history.
According to history, Amina never had children as she refused to get married so as not to lose her power to a man. Instead, she takes a temporary husband from the conquered people after each battle.
After spending the night together, she kills them the following to prevent them from speaking about their sexual encounter with her.
Legend records that she died during a military campaign at Atagara near Bida in Nigeria. Her exploits earned her the moniker “Amina, daughter of Nikatau, a woman as capable as a man”.
Her legendary escapades made her the model for the television series Xena: Warrior Princess. Today, her memory represents the spirit and strength of womanhood. One thing is certain; Queen Amina’s legendary was not a fiction but a full story fully documented by successive historians and chroniclers through generations.
For her bravery and accomplishments, a statue was built in her honour at the National Arts Theatre, Lagos, Nigeria and several educational institutions in Nigeria bear her name 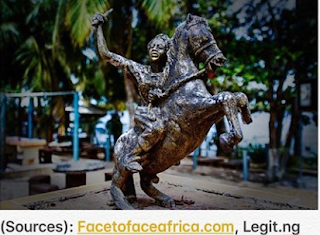