October 20, 2018Featured Places by NaijaMemoirsLeave a Comment on The Burj Khalifa 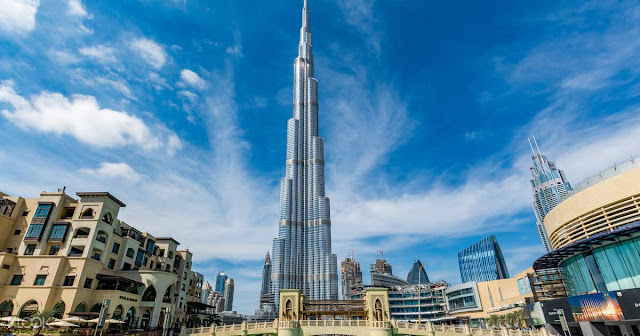 The Burj Khalifa:
Record Height – Tallest in the world since 2008
Coordinates – 25°11′49.7″N 55°16′26.8″E
Construction Started – January 6, 2004
Completed – October 1, 2009
Opened – January 9, 2010
Cost – $1.5billion
The Burj Khalifa, known as the Burj Dubai prior to its inauguration in 2010, is a skyscraper in Dubai, United Arab Emirates. With a total height of 829.8 m (2,722 ft) and a roof height (excluding antenna) of 828 m (2,717 ft), the Burj Khalifa has been the tallest structure and building in the world since its topping out in late 2008.
Construction of the Burj Khalifa began in 2004, with the exterior completed five years later in 2009. The primary structure is reinforced concrete. The building was opened in 2010 as part of a new development called Downtown Dubai. It is designed to be the centerpiece of large-scale, mixed-use development. The decision to construct the building is based on the government’s decision to diversify from an oil-based economy, and for Dubai to gain international recognition. The building was originally named Burj Dubai but was renamed in honour of the ruler of Abu Dhabi and president of the United Arab Emirates, Khalifa bin Zayed Al Nahyan; Abu Dhabi and the UAE government lent Dubai money to pay its debts. The building broke numerous height records, including its designation as the tallest building in the world. 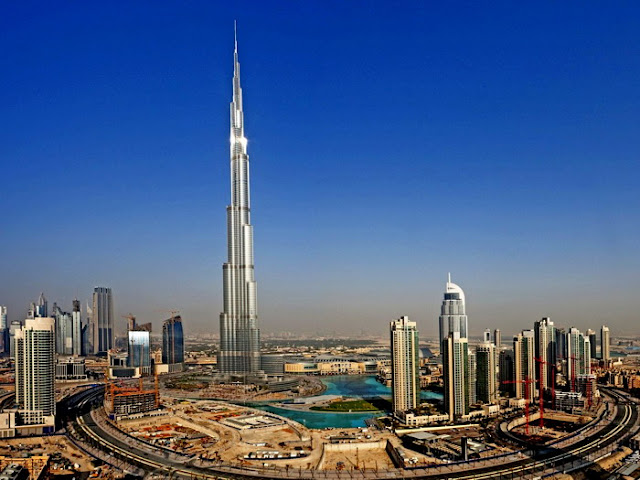 Burj Khalifa was designed by Adrian Smith, of Skidmore, Owings & Merrill, whose firm designed the Willis Tower and One World Trade Center. Hyder Consulting was chosen to be the supervising engineer with NORR Group Consultants International Limited chosen to supervise the architecture of the project. The design is derived from the Islamic architecture of the region, such as in the Great Mosque of Samarra. The Y-shaped tripartite floor geometry is designed to optimize residential and hotel space. A buttressed central core and wings are used to support the height of the building. Although this design was derived from Tower Palace III, the Burj Khalifa’s central core houses all vertical transportation with the exception of egress stairs within each of the wings. The structure also features a cladding system which is designed to withstand Dubai’s hot summer temperatures. It contains a total of 57 elevators and 8 escalators.
Construction began on 6 January 2004, with the exterior of the structure completed on 1 October 2009. The building officially opened on 4 January 2010, and is part of the 2 km2 (490-acre) Downtown Dubai development at the ‘First Interchange’ along Sheikh Zayed Road, near Dubai’s main business district. The tower’s architecture and engineering were performed by Skidmore, Owings & Merrill of Chicago, with Adrian Smith as chief architect, and Bill Baker as chief structural engineer. The primary contractor was Samsung C&T of South Korea. 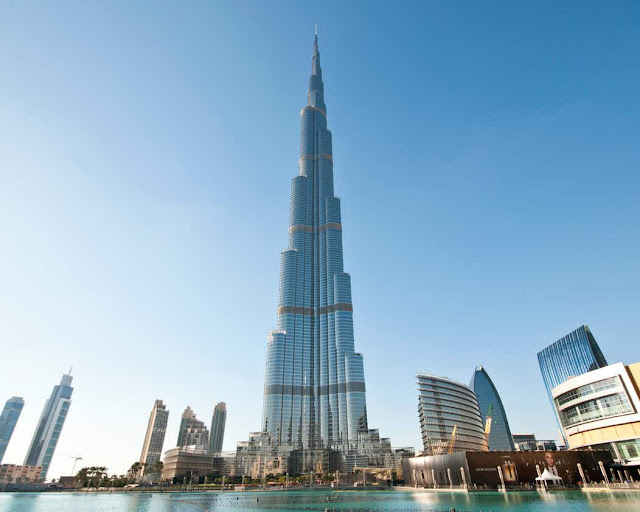 Burj Khalifa was designed to be the centerpiece of a large-scale, mixed-use development to include 30,000 homes, nine hotels (including The Address Downtown Dubai), 3 hectares (7.4 acres) of parkland, at least 19 residential towers, the Dubai Mall, and the 12-hectare (30-acre) artificial Burj Khalifa Lake. The decision to build Burj Khalifa was reportedly based on the government’s decision to diversify from an oil-based economy to one that is service and tourism based. According to officials, it was necessary for projects like Burj Khalifa to be built in order to garner more international recognition, and hence investment. “He (Sheikh Mohammed bin Rashid Al Maktoum) wanted to put Dubai on the map with something really sensational,” said Jacqui Josephson, a tourism and VIP delegations executive at Nakheel Properties. The tower was known as Burj Dubai (“Dubai Tower”) until its official opening in January 2010. It was renamed in honour of the ruler of Abu Dhabi, Khalifa bin Zayed Al Nahyan; Abu Dhabi and the federal government of UAE lent Dubai tens of billions of US dollars so that Dubai could pay its debts – Dubai borrowed at least $80 billion for construction projects. In the 2000s, Dubai started diversifying its economy but it suffered from an economic crisis in 2007–2010, leaving large-scale projects already in construction abandoned.
Culled from Wikipedia