March 6, 2019Featured Literature by NaijaMemoirsLeave a Comment on Titanic 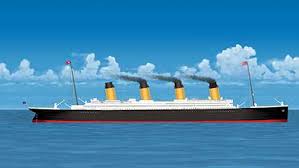