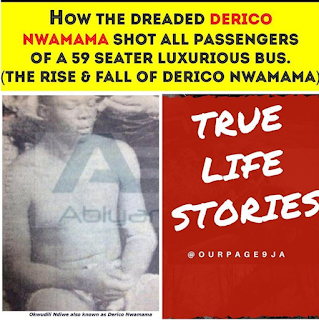 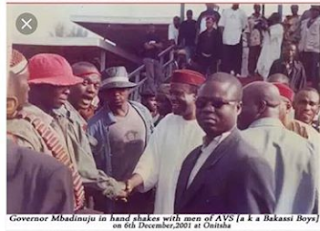 After that horrible incident, the then Governor of Anambra had no option but to bring in the dreaded Bakassi Boys to help the State.
On Tuesday, July 3, 2001, Derico was in a bus going from Agbor to Onitsha, and getting to the Onitsha axis of the bridge head, the dreaded Bakassi Boys stooped. Sensing danger, the crime lord jumped out of the window to run away, but before he could make the first after jumping out, the nearest Bakassi member on the scene chopped off his left ear and that was how Derico was captured. It was funny how he started crying and pleading for his life. He was taken to Borromeo Hospital for treatment because he was bleeding profusely.
When news of his capture broke, every single human being in Anambra State rejoiced. Derico met his end in the most awful manner. Before then, the Bakassi had developed a terrible blood chilling reputation for dealing with suspects and Derico’s days were surely numbered from when he was caught. On the 9th of July 2001, six days after Derico was captured, the Bakassi did to him what many had earlier predicted. Chanting war songs, they drove in their convoy around the town and ended at the Ochanga Market Junction along the popular Upper Iweka Road in Onitsha. As their buses came to a halt, shouts of excitement and expectation rented the air. Many knew the fate that will befall Derico, so they all trooped to the spot to witness the final judgment on him. Derico was dragged out from the bus, looking gaunt and severely beaten, a trademark of the vigilante group. His body bore cuts and gashes, a testament to what he must have gone through in their hands.
The Bakassi Boys continued chanting war songs, egged on by the crowd. One of the commanders of the Bakassi Boys named Okpompi, addressed the crowd telling them that they were in the State not for politics, but to fight crime.
He handed the microphone to the now trembling Derico, who, like a coward, began begging that his life be spared. He made feeble attempts of declaring his innocence. He said: “My name is Oddy, alias Derico, alias Nwamama. I appeal to the people of Anambra State, please don’t kill me. I don’t like evil. It was when I killed Chiejina that people thought I was a strong guy. I trust Bakassi Boys. They are strong. Please, mercy for me. Nobody can identify me as having robbed him. People just believe that I am a string guy”.
He confessed that while he was on the run, he was sheltered by a member of the National Assembly at Abuja. He also confessed that he had two other powerful protectors, one being a member of the Anambra State House of Assembly while the other was the Chairman of a Local Government Council. With the speed of a guillotine, a cutlass handled in the strong arm of one of the Bakassi Boys flew and came down with an unforgiving thud, landing on Dreico’s slim neck, and in a flash, Derico was beheaded.
Derico was just 22 years Old when his head left his shoulders. The crowd was satisfied and as far as the Bakassi Boys were concerned, that was a clear lesson and message to any criminal bent on making life miserable for Anambrains.
With the lifeless remains of Derico still lying on the floor, the people erupted into jubilation, patting one another on the backs and exchanging mutual congratulations after a monstrously grotesque show of iron and blood. His remains was chopped into sizable chunks, heaped up and set on fire.
After his death, lots of movies were made about him. 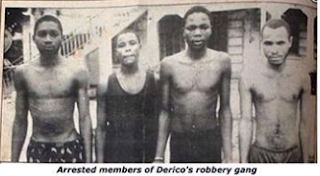