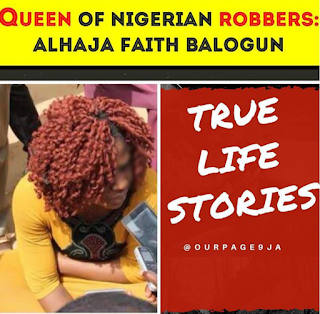 Alhaja Faith Balogun robbed with the likes of Abiodun Ogunjobi, alias Godogodo, and Goke. These two men were also feared in the robbery world. She had been named several times by robbers arrested by SARS in different states to the extent that she became one of the most featured wanted female robbers on Police lists.
Prior to her death, Balogun told the Police that she was 37 years old, but she is believed older than that.
She had three kids, two girls and a boy, but they are all from different fathers. She was part the gang which attacked a new generation bank in Ketu, Lagos State, where a pregnant bank manager was killed in October 2008.
The pregnant bank manager was shot 5 times in the head after she refused to cooperate with the bandits. They shot her several times after up the bank’s door with explosives and finally gained access into the banking hall.
Balogun and Godogodo and other dreaded armed robbers were part of the gangs that raced through Lagos State on September 9, 2012, (after they robbed a Bureau de Change at Agege) shooting, maiming and killing in what many residents in the state latter dubbed “Black Sunday”.
Although the Police had heard a lot of sleazy stories about Balogun, many of them had not set eyes on her.
She was arrested by the Special Anti-Roberry Squad (SARS) in 2009, investigated and charged to court but was however released and allowed to go by the court. At that time, nobody knew she was the infamous “Alhaja Faith, queen of Robbers”.
In 2013, Balogun was arrested on the charges of attempting to buy a stolen car. The Policeman who arrested her did not know that they were dealing with the notorious ‘Alhaja Faith’.
Acting on a hunch, the Police searched every nook and cranny of her home in search of incriminating items like guns but came back empty handed.
After three months of detaining her, SARS decided to let her go since they could not pin anything on her.
While waiting for someone to come and bail her, she walked into one of the police officers’ office, unaware that a robbery suspect was inside with the anti-robbery men.
The suspect immediately identified her as the infamous Alhaja Faith. A Police source said that she fell to the ground and started weeping profusely as she could not deny not knowing the suspect and also knew that she had come to the end of the road.
Balogun confessed to her numerous crimes and how she spent seven months in Kirikiri female prisons previously, because of her lover. She also claimed that money changed hands and she was released.
Alhaja Balogun died in the custody of SARS, Ikeja, Lagos State, as a result of complications arising from HIV/AIDS in December 2013, just as Police Detectives were still gathering more dirt on her criminal activities.
Balogun was said to have slumped and died at SARS on a day she had just returned from the General Hospital, Ikeja.
It was also gathered that Balogun had also been suffering from and receiving treatment for Tuberculosis.
Source: theeagleonline, Ourpage9ja