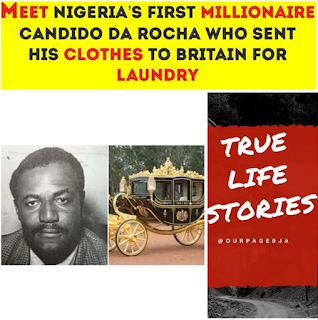 Da Rocha as he was fondly referred to was born in 1860 as the son of Joao Esan Da Rocha, a former slave who returned from Brazil to start a business empire.
Joao Esan Da Rocha who was Ilesha was captured as a slave at the age of 10 and taken away to Brazil in 1840. Joao Esan later got married to Angelica Josephina Da Rocha while in Brazil. The couple gave birth to Candido while still in Brazil.
In 1871, Esan alongside other slaves regained their freedom and a lot of slaves were able to trace their roots back to the Yoruba tribe.
Candido Da Rocha steeped into his father’s business empire, which he later expanded and consolidated into a multi-million pound financial empire, straddling agriculture, hotel, trading, real estate, banking and financial investment.
The junior Da Rocha, Candido, was reported to have just the language skills of Portuguese and Ilesha on his return. He attended the popular CMS Grammar School in Lagos where he was Head Boy. He was a friend to late Hebert Macaulay who was also his school mate. He had vested interest in business.
Candido was said to have laid water pipes from Iju to Lagos Island, Yaba, Ebutte Metta and other areas where there was high demand of pipe borne water. He was said to have lived in his house and operated the Iju water works that served the whole of Lagos in the 20s. The colonial administrators were said to be paying Da Rocha for the supply of water to Lagos State. His house had the first borehole and also the first water fountain.
He was said to have sold water to the people from his house. He made good fortune from his water business such that he became very rich that the government had to take it from him. His other businesses included money lending which he did with two other rich men, J .H Doherty, and Sedu Williams and together they started a bank named Lagos Native Bank. He also went into fishery business and also opened a restaurant.
In what would eventually mark the beginning of his fortunes, an English gold prospector who wanted to travel back to England approached Da Rocha in 1894 with bars of gold that he had mined and wanted to dispose of. Da Rocha did not have the money required to buy the goods as the Englishman wanted 6,000 pounds. Candido Da Rocha approached the Bank of West-Africa now known as First Bank.
The bank lent Da Rocha the required money with which he purchased the gold bars. He was later to file the gold bars into gold dust and sold in retail to the local gold smiths. He was said to have made a whopping 200% profit on the sales.
Candido Da Rocha went into the banking business and was the first African to own a bank called Lagos Native Bank which was established in 1907. He joined hands with J.H Doherty and Sedu Williams to establish the bank, but ran it himself.
The bank gave other big banks a run for their money until Da Rocha was swindled. He later opened the Lagos Finance Company which lent out money to people.
A lover of horses and horse racing, Da Rocha became one of the founding members of the Lagos Race Club in 1891. He participated in many tournaments at the Race Course in Lagos and won a lot of trophies too. His champion horse also won a lot of tournaments.
Candido Da Rocha had a lot of properties in Lagos which he gave Brazilian names. One of his most famous properties was the Ilojo Bar which he bought when he was 34. Ilojo Bar was unfortunately demolished in 2016.
His country home and hunting ground was 55 hectares of land in Agege. He was also a founding member of Anti Slavery and Aborigines Right Society.
Research revealed that Candido Da Rocha lived alone most of his adult life and was never formally married to any woman whether traditionally, in court or in the church despite being a strong Catholic. He was said to be a difficult man to live with. Three women were known to have had children for him and lived with him briefly.
One of the women, who had his first child and only son Alexander Candido Da Rocha, was originally from old Gold Coast, now Ghana.
The second woman had a son for him who died at an early age. Thereafter, he had four daughters; three were born by the same woman and one daughter, Enitan Salako, from another woman.
His daughters include Louissa Ebun Turton, the Second daughter was called Angelica Folashade, who later became Mrs. Thomas.
Da Rocha was very rich- he was a millionaire in those days and very generous. The elite in those days sent their dirty clothes to Britain for laundry. The Da Rochas, Johnsons, Dohertys and Olowus were foremost wealthy people. They did not wash their clothes in Nigeria. They sent them abroad for laundry.
Though there no Limousines or Rolls Royce, Da Rocha was said to have moved around in his luxury horse drawn carriage.
Candido Da Rocha died in 1959 and is buried at the Ikeja Cemetery.
Source: legit.ng, Ourpage9ja