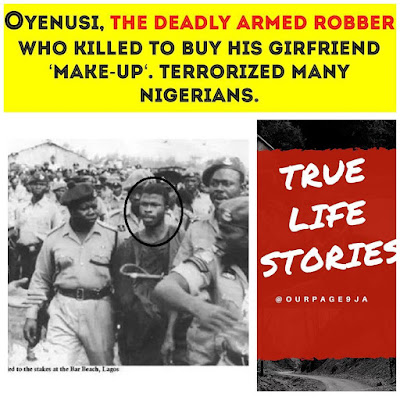 In the History of crime in Nigeria, Oyenusi was a cold-blooded armed robber who held sway in the early 70’s, stands on a very special threshold that none can ever dream of attaining. He was a terror. He and his gang carried about operations in Lagos City and neighbouring states.
In criminal  books, Dr Oyenusi was the first celebrity armed robber in Nigeria in those days.
He took the Nation by storm shortly after the Civil War ended and before he was executed on Wednesday, September 8, 1971, at the famous Bar Beach show in front of 30,000 watching  Nigerians, no one believed that ‘The Doctor’ would be captured, as he was famed for ‘disappearing’ or his body not penetrable by bullets.
His full range of crimes included armed robbery, carjacking, and murder. He robbed banks and looted stores. It is safe to say, Ishola Oyenusi was a menace. He unleashed boundless terror on many Nigerians and would even kill for a stick of cigarette.
He called himself Dr. Oyenusi to be fancy. He was far from a medical doctor. Information on his background is sketchy. His date of birth is not known. It is however known that he came from a poor background which ultimately led to a life of crime. His parents couldn’t afford his secondary school education, so he had to drop out.
He committed his first major robbery when he snatched a car along Herbert Macaulay Road in Yaba, Lagos, and killing its owner just because his girlfriend was broke and needed money to buy her make-up. He eventually sold the car for 400pounds (Nigeria’s currency then) and handed the money to the lady. He actually snatched the first car he saw on the road. Such was the ferocious nature of his audacity.
This is the reason why he is sometimes referred to as the romantic armed robber.
He had a mean streak in him also as he was hot headed and very arrogant, even to the law.
His professional criminal career started after the Civil War in 1970. Dr. Oyenusi and his gang of robbers went on a spree, robbing banks and killing people in cold blood. His knack for killing his victims made people call him “Doctor Rob and Kill”.
By the end of the Civil War, Oyenusi had metamorphosed into a cold-hearted robber who took delight in causing pains to his victims.
Oyenusi’s arrogance was also legendary. In 1970, he was arrested and handcuffed by a Police Officer. As the Policeman was ordering him around, Oyenusi blasted him and thundered : “People like you don’t talk to me like that when I am armed. I gun them down’.
When Oyenusi reigned at the height of his regal confidence, he declared: ‘The bullet has no effect over me’. 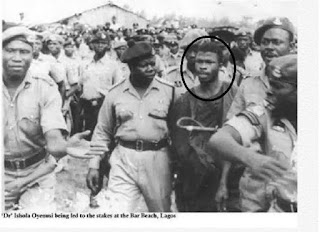 His last robbery was when he and his gang attacked the WAHUM factory in Ikeja in March 1971, where they stole 28,000 pounds, which was unprecedented in those days. A Police officer was killed in the process.
The Nigerian Police Force caught him during the armed robbery operation. Justice was swift for the dare devil killer. He was sentenced to death.

On the day of Dr. Oyenusi’s execution (which took place at the Lagos Bar Beach by firing squad), it was reported that about 30,000 Nigerians showed up to see his end.
At 10 a.m, Oyenusi and his gang were brought in trucks. People booed them as they slowly got down and marched towards their death.
According to Old Naija, Oyenusi was “sweating profusely but managed to smile all the way to the stakes .He kept smiling and smiling and smiling but could still not hide the agony and terror written boldly on his face”. Some witnesses claim that he would have never become a criminal if only his parents had had enough money to send him to school. 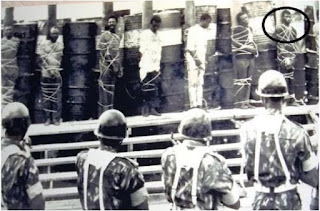 After journalists interviewed the criminals, the soldiers pointed the gun at them and fired.
That was the end of Ishola Oyenusi.
(Source: Pulse.ng, OurPage9ja)