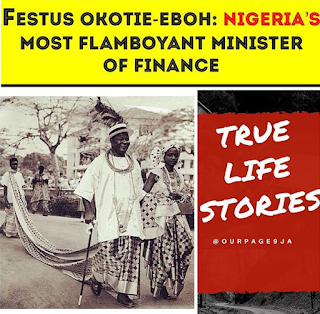 Chief Festus Okotie-Eboh  (1919-1966) was a prominent and flamboyant Nigerian politician and former minister of finance during the administration of Sir Abubakar Tafawa Belewa.
Okotie-Eboh, an affluent chief from the Itsekiri and Urhobo tribes of the Niger Delta who took pride in showing the rich traditions of his roots, spared nothing to show his colleagues the rare breed that he was in what the incomparable elder statesman, Alhaji Maitama Sule described as “his unusual flamboyant way-the cap and feather, his long cloth that flowed behind him and attached to a boy some distance away; he was loved by all irrespective of party affiliations. He was hailed by all”.
He remains one of the most flamboyant and exquisitely dressed Nigerian politicians ever. He typically dresses in flowing garments, with a stretch of cloth several yards long attached to a boy.
Despite being mentioned in several corruption allegations, Okotie-Eboh is still regarded as one of the founding fathers of Nigeria. He played a role in the formation of the Nation and leading up to and following Nigeria’s Independence.
Okotie-Eboh was killed on January 15, 1966  alongside the Prime Minister Tafawa Belewa, Premier of the North, Sir Ahmadu Bello, Premier of the West, Chief Ladoke Akintola and some other senior military officers. 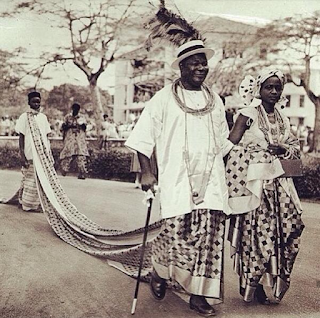