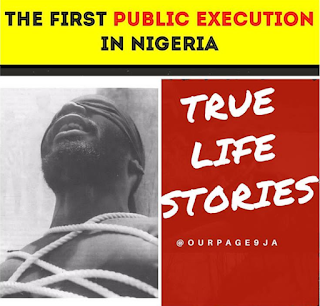 The Bar Beach was a fun spot for people and families to have fun back in the day. It was also a spot for religious, white garment prophets praying for people seeking one thing or the other.

The famous Bar Beach (now Eko Atlantic) served another purpose- the public execution of criminals. After the civil war, the military government wanted to deal with the rise of armed robbery in the country.
The government came up with an answer;- Public execution at the beach. It was a PR answer to discourage people from turning into a life of crime.
One of the first people to be executed was Mr. Babatunde Folorunsho, a fashionable high was robber. Folorunsho had been a pain in the neck of the police for years. His time came to an end in 1971 after he was arrested.
He was charged to court for robbing a man called Mr. Alfred Marshall and taking his car. Along with others, Folorunsho was sentenced to death in April 1971. On a bright sunny day in July 1971, Folorunsho stepped out of the truck wearing an expensive lace material (the choice of rich people back then) to be killed.
He wasn’t the only one to step on the sand that day. There were two others- Joseph Ilobo and Williams Alders Oyazimo a sub-lieutenant in the Nigerian Navy.
When Ilobo came out from the truck and saw the huge crowd who came to see him die, he reportedly said: “Are all these people here to see me die? Ah! This is a wicked world…. I have not committed any crime.”
The duo was accused of robbing one Alhaja Taibatu Opene of a loud speaker and record player valued at the equivalent of N320. Oyazimo pleaded not guilty, just like Ilobo. Folorusho was not bothered about the crime because he owned up and gave himself out as a jailbird. The trio was sentenced to death for robbing with violence.
The young naval officer maintained he was being shot wrongly. “If you search your conscience, you will know that a naval officer of my status will never go in the dead of the night to steal. I will die today, innocent of the crime for which I am condemned”, he told journalists. Many went emotional when Oyazimo broke down before the military chaplain, Col. Pedro Martins.
The Monsignor had asked him to pray for forgiveness. “Father, I am innocent. My blood will cleanse my family and my children will prosper”, the condemned said amid sobs. Ilobo sang the same tune. “Make una go call that Alhaja, make she come see we die”, he screamed shortly before the deed was done.
Oyazimo was one of the pioneers that started what we know today as the Nigerian Navy in 1958. Oyazimo joined as a seaman alongside John Brambaefa, who is today addressed as Senator, and Duncan Abebele.
After they were tied up, the soldiers blasted bullets into their bodies and on that day with thousands of people at the beach, history was made.
Public executions would continue to the 90s. Famous robbers like Anini and Dr. Oyenusi were executed at the Lagos Bar Beach.
Source:Gregnwoko.com, Pulse.ng, Ourpage9ja.