February 1, 2019Uncategorized by NaijaMemoirsLeave a Comment on True Life Stories – Ghana Must Go 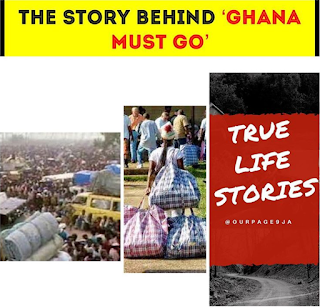 In 1983, the Nigerian Government ordered more than a million Ghanaian migrants to leave the country within just a few weeks.
It was late January 1983 and President Shehu Shagari suddenly announced that all foreigners without the right paper work had just two weeks to leave the country. Almost all of them were West African; the majority of them were from Ghana.
The Nigerian Authority said in an official statement: “If they don’t leave, they should be arrested, tried and sent back to their homes. Illegal immigrants, in fact, under normal circumstances, should not be given any notice whatsoever.”
Across Nigeria, up to two million migrants heard these warnings. They packed what they could in trucks, cars, pick-ups and taxis, and tried to get out of the country. The main route home to Ghana was west through the tiny neighbouring states of Benin and Togo.
Many families were stranded; over laden lorries, cars or taxis had brought them this far but they camped out in the hope of being capable to complete their journey home.
Among the exiles, at least one million were Ghanaians.
The majority of Ghanaians were drawn to Nigeria during the oil boom of the seventies, but by 1983, the Nigerian economy was suffering and it was an election year. Nigerian politicians hoped the expulsion would prove popular. Those with longer memories remembered that Ghana had expelled Nigerian migrants in 1969 but the scale this time was unprecedented.
Following an attempted coup the previous year, Ghana’s leader Jerry Rawlings had clo9sed the main land crossing with Togo and so, to avoid being host to a sudden influx of over a million migrants, Togo, in turn shut its border with Benin. That left the Ghanaian refugees stuck again.
Tens of thousands of refugees, mostly Ghanaians, were massed at the border of the two tiny African states of Benin and Togo. The road home to Ghana had come to a standstill, hopelessly clogged with vehicles and a mass of refugees, while the frontier remained temporarily closed.
Finally, Ghana relented and opened its border. Togo followed suit. Within minutes of the frontier opening, there was chaos. Many families had been waiting ten days to walk the fifty yards from Benin to Togo.
There had been real fears that Ghana whose population was then around 12 million, could not cope with such an influx. Its economy was already in crisis. There were shortages. There were bush-fires and drought, and yet, across the country, the refugees were reabsorbed by their communities.
Within a year, thousand of Ghanaians had returned back to Nigeria and there was another, much smaller round of expulsions two years later. Today, there remains a small everyday reminder of the exodus called ‘Ghana must go’.
‘Ghana must go’ was the name given to the huge cheap checkered bags used by Ghanaians more than thirty years ago which are still popular today. The migration then was called ‘Ghana must Go’.
Source: Legit.ng, Ourpage9ja