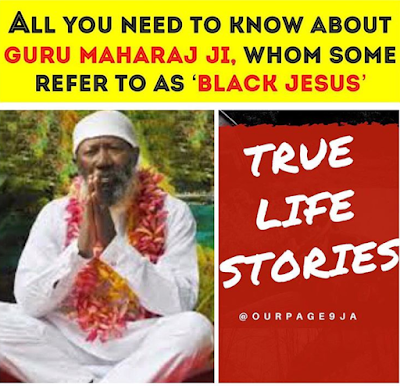 Guru Maharaj Ji, born Mohammed Ajirobatan Ibrahim, is a Nigerian spiritual leader. He was born in Oyo State, resides in Ibadan and declared himself to be a “Living Perfect Master” while some of his followers call him “Black Jesus”.
His spiritual group was founded on Nov 1, 1987 having received divine knowledge while studying in London in 1954. He says that he has power over all illness and all problems affecting humanity.
In his words, “During the divine encounter, I received the light and was mandated to go and liberate mankind from poverty, oppression and injustice, I was specifically told to return to Nigeria and start the work of the one that sent me.
It was once reported in the media that he claimed “he is God”, which he addressed in an interview ‘I am not that type of god that people pray to, yet they steal, kill, maim and fornicate. But when you talk of the god of love, harmony and instant effect, here I am. I am not god but I am the god of peace, love and unity to be seen, touched and felt. I am no talking about an abstract God. In other words, the unseen God and I are one, because definitely, someone must represent His interest here on earth physically, dramatically, consciously and carefully.’
The guru’s devotees see the sun, moon, water, fire, air, star and the mother-earth as part of the pillars of their faith.
According to their master, “We are trying to convey a simple message about nature created by the creator that forms the origin of man. All human beings are related to one of the elements in one way or the other. They form the second character in man that shapes the destiny.”
Ji leads a communitarian group with various names such as One Love Family, the One Love Mission, One Love;One Family,and the Divine Love Family. The group has an ashram, “Satguru Maharaj Ji Village” on a lonely stretch of the Ibadan-Lagos Expressway near Ibadan. Its members are vegetarians, who are mostly dressed in white/red and wear badges as signs of their loyalty. Shoes and phones are not allowed on the property.
They see their master as the Living Perfect Master or the Black Jesus, who can solve anything.
In 1989, former members claimed that 200 bodies were buried around the ashram. He was arrested, but the charges were dropped when no bodies were found. In 1999, the ashram was burned down by youths connected to the Iju Youths Progressive Union who were angered by the alleged killing of a Ghanaian man by devotees. He was charged with the crime along with twelve of his disciples, and was kept in jail for several months. He was again acquitted in 2000. While incarcerated, he received an average of 25 visitors a day. The judge criticized the prosecution for its lack of diligence. A state governor tried to shut down the ashram and acquire the property, but Ji was able to prove ownership in court.
In the past, Guru Maharaj Ji has stirred up the hornest’ nest with claims in 2009 that the General Overseer of the Redeemed Christian Church of God, Pastor Enoch Adeboye, is his spiritual son.
Also in 2016, he caused a stir with his colourful appearance at the Ooni of Ife, Oonirisa Adeyeye Ogunwusi and Olori Wuraola’s wedding. 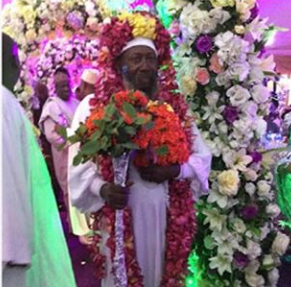 He also claimed to have “healed” a former Military Head of State, General Ibrahim Badamosi Babangida.
Speaking to media personalities at the Nigerian Union of Journalist, NUJ Secretariat in Alausa, Ikeja, Lagos State, he said, “I remember that I treated Ibrahim Badamosi Babangida (IBB) when he was afflicted by an ailment in his leg. I cured him”.
This claim has been denied by Babangida.
In 2000, he asserted that a visit by U.S President Bill Clinton to Nigeria was part of an American plan to open a military base in Nigeria and take control of Africa.
In 2003, he said the re-election of Olusegun Obasanjo as President of Nigeria was part of a ‘Golden Change’, for which he was responsible.
Those who have sought spiritual guidance from him include Mohammed Abacha and Hamza al-Mustapha.
Just recently, Satguru Maharaj Ji in his 2019 prophecies has revealed who will win the upcoming 2019 Presidential election.
Speaking with journalists in his Maharaj Ji village in Ibadan, the Oyo State capital, Maharaji said he saw President Muhammadu Buhari winning the election with more votes than other candidates.
He also advised that anyone that is not happy with his declaration for Buhari in 2019 should come and meet him.
Source: Wikepadia,
:Pulse.ng