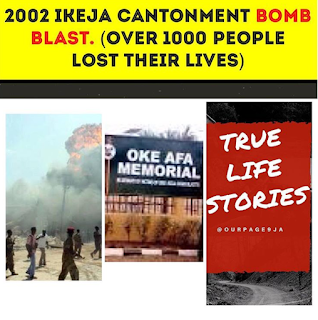 Sunday, January 27, 2002 was particularly a gloomy day for many families in Lagos State. The trouble, which eventually sent many to their graves prematurely, started around 5pm when there was a sudden explosion, akin to that of an earthquake. The loud bang shook the entire Lagos City, as if bombs were detonated behind the windows of each of the residents.
Being an unprecedented occurrence and not knowing what was actually happening, people, understandably, started running helter-skelter. Whilst scampering for safety, they heard several other explosions of the same intensity, and in imagination of many, it was as if another war had started. The vibration shattered windows, roofs and brought down buildings several kilometers away.
Unknown to many, the explosion, which sounded for about seven times and almost ripped the metropolitan city apart, was coming from Ikeja Military Cantonment.
It was later gathered that some high calibre bombs kept underground at the military facility were not well stored, which led to the accidental discharge of the bombs. Another version said there was a fire outbreak at the Armoured Technical Dump within the facility which later spread to where the bombs were stored and triggered the deadly explosions.
Within seconds, there was commotion across the city, and as people were running for their lives, the stampede led to deaths, and by the minute, the death toll began to rise. Thus, across the city, dead bodies littered the streets. Out of panic, people jumped into fire, some ran into moving vehicles and were knocked down while some were burnt to death by the raging fire. While these situations were incredibly unfortunate, one location that seemed to record the highest number of deaths was a large canal at Ajao Estate which links Oke Afa in Isolo. Unfortunately, the canal (filled with water) had been covered by water hyacinth, and as people ran into the suspected ‘bush’, they were being drowned in the water.
People stepped on themselves and many more were drowned. Children, parents and several others were killed, while some families were completely wiped off.
By the time the last bomb went off and a bit of calmness returned to the city the following day, over 1,000 persons were found to have died, several others went missing and have not been found till date, while several thousands were displaced and thousands were displaced and thousands had varying degrees of injuries. It was one accident too many.
Following the incident, the Federal Government, under President Olusegun Obasanjo, and the Lagos State Government promised to compensate the victims’ families. But owing to delay in fulfilling the promises, a man who lost two of his children to the incident, Mr. Olaniran Majekodunmi, brought other affected families together to form a group to compel the Government to fulfill its promise.