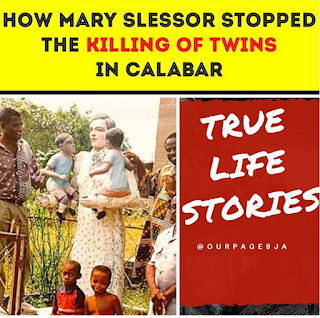 In ancient days in Nigeria, birthing twins (amongst other things) was considered a taboo.
The ancient City of Calabar , home to the Efik/Ibibio speaking tribe was among the people who practiced the killing of twins.  All these continued until the arrival of the famous Scottish missionary, Mary Slessor.
Mary Mitchell Slessor, born December 2, 1848, in the city of Aberdeen, Scotland, was the second child of the family of seven children. Growing up with an alcoholic father around, Mary was forced to become the breadwinner, working 12 hours a day to fend for her family. However, with the influence of her mother, Mary fell in love with the church and by the tender age of 11, she joined the local missionary and never looked back.
Yearning to share the good news across the world like many famous missionaries, Mary Slessor set sail for Nigeria at the age of 28 to carry out missionary works in 1876. 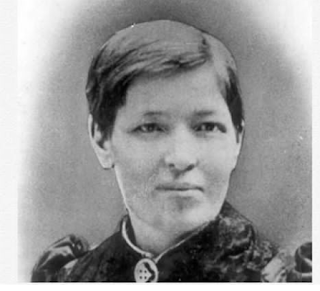 Missionary posted to foreign lands had strict rules. They were expected to dress in a certain way and also live in the shelter provided, distant from the settlement. The same was expected of Slessor who was posted to Calabar. After spending three years in the missionary home, Slessor proved herself a fearless woman, eager to integrate herself with the villagers as she left the missionary house to go live among the Efik people of Okoyong village. It is important to note, that the Okoyong people were widely feared and infamously known for their barbaric practices that included cannibalism as well. 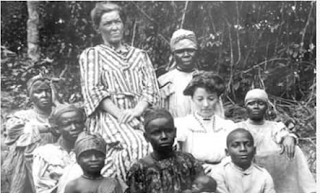 Witchcraft and several cruel traditions existed among the Efik people of Okoyong. Twin murders however stood out. They greatly believed that twins were as a result of a curse caused by an evil spirit who fathered one of the children. Since it was impossible to tell which child was cursed, both babies were brutally murdered or abandoned in the evil forest and the mother, ostracized.
Mary Slessor, greatly depressed by the unfair and horrific treatment meted out to the mother and children, decided to take matters into her hands. Though she had familiarized herself with the villagers, she was not completely accepted by the people who were known to kill even missionaries as well.
Mary Slessor fearlessly forged ahead with her decision to stop the brutal killings of babies, since the belief was that these children were possessed by evil spirits an were likely to cause harm if kept alive, she pleaded with the Chief to take the children into her own home and cater for them. This was to prove that they were nothing but innocent and harmless.
Although her request wasn’t granted the first time, she went on with her plan to rescue the children who were often left in pots to die. Mary Slessor made it her duty to educate people on the gravity of their actions. On foot, Mary Slessor went about from house to house, preaching the gospel and praying over the sick.
The healing powers of her hand made the villagers begin to develop faith and believe in the God she preached about. Gradually, she was accepted and began to adopt the abandoned children hiding them on the Island which is today known as Twin Island. She took in as many as she could and raised them as her own as some even answered her last name. Today, the land is owned by the descendants of those rescued and orphaned.
Mary Slessor lived in Calabar for 40 years, where she carried out mission works, empowering women as she established a number of churches as well as educational institutes.
Mary Slessor broke the status quo in her religious practice. It wasn’t about just bringing the Good News to people, the need to show love was equally important if not more. This, she was willing to do as she lived among the people, showing them nothing but kindness and the light of God.
When she died in 1915, Slessor was honoured with an elaborate funeral, with the senior British officials attending in full uniform and flags flying at half mast at government buildings. As expected, everybody mourned her.  She was fondly referred to as ‘Eka Kpukpru owo’ which means ‘Everybody’s Mother’. She was not just a mother, but a friend, a messenger of hope a helper, a healer and most importantly, a life saver.
Today, there are statues and other memorabilia preserved to remember her. On the Twins Island, there is a statue of her holding two children on both arms, signifying the twins she saved. There is also a roundabout on the Marian part of  Calabar and right in the middle is yet another glorious monument of the Scottish missionary.
Her legacy is not just remembered in Nigeria, but also in her homeland, Scotland.
Slessor is the first woman to appear in the front of a Scottish Clydesdale Bank Ten Pound note and she is depicted holding children in her arms alongside a map of the Efik and Ibibio in Calabar. 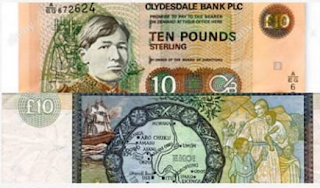 Mary Slessor was decorated with many names and accolades; the barefoot missionary, the white queen of Calabar, everybody’s mother, and lots more. All of these came from a place of love and admiration from a people who were given a real chance at life by the foreigner that once walked the bushes of Calabar sharing love one soul at a time.