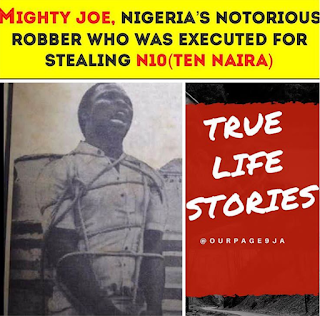 Isiaka  Busari aka Mighty Joe is known to be one of the most violent armed robbers, a criminal who unleashed boundless terror on many Nigerians in 1970’s.
Shortly after the notorious kingpin of armed robbery in Nigeria, Ishola Oyenusi, was executed, his second in command, Isiaka Busari, better known as Mighty Joe, took over the scene and became the defacto king of the underground.
Nigeria was still coming out of the pangs of the civil war and with the death of Oyenusi, they thought the era of violent crimes had been nipped in the bud but little did they know that another hoodlum would spring up and become deadlier. In Mighty Joe’s gang were ex-soldiers who were demobilized and with their knowhow in the handling of guns and other deadly weapons, they held the nation, particularly the South-East, to ransom, robbing and killing with reckless abandon.
Mighty Joe was even deadlier than Oyenusi and was known to operate at any time he felt like and taking a human’s life was nothing to him. For many years, he constituted a big terror to the people of Lagos, the then Federal Capital, especially around Mushin where he lived and practiced his trade. He strode his hemisphere like a colossus from 1971 when his boss was killed to 1973 when he was nabbed after robbing a hotel bar attendant Michael Osayunana, of the sum of 10 naira.
Nigeria had just changed from using Pounds to Naira and 10naira was quite a huge sum of money back then. In fact, one could buy a brand new 504 Peugeot car with that amount and still have some change left. 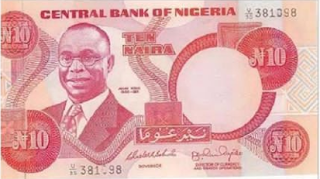 The arrest of Mighty Joe according to legend was as dramatic as his reign of terror. The self-styled ‘Strongman of Idi Oro’ was caught when someone he had earlier robbed recognized him and fingered him to the Police and he was nabbed without any fight, as against his previous boast that no man born of a woman can arrest him due to his strong belief in spiritual powers. He was said to pay some herbalists huge amounts to prepare charms for him so that he would remain invincible.
However, some people believed that Mighty Joe was arrested on trumped-up charges, claiming he was not the great and notorious robbers the police said he was. Some even believed that he was not even an armed robber but a common street thug, or an area boy like we call them today. Such people claimed that Nigeria’s biggest newspaper at that time, the Daily Time’s, was partly owned by the Federal Government and the wealthy Alakija family of Mushin and Mighty Joe was said to have had a tussle with one of these prominent families who then set him up and ensured that he was executed. While he was in prison awaiting his day at the Bar Beach, Mighty Joe was converted to Islam and even offered prayers that the execution be reverted. That was never to be. 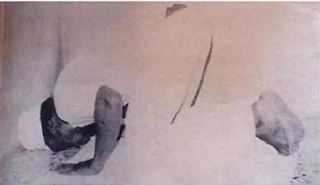 His journey to the stakes just like that of his master Oyenusi, Mighty Joe had a VIP ride from Kirikiri Prison to the Bar Beach in a police van escorted by six lorry loads of tough-looking anti-riot policemen.
Hundreds of motorists, many of them workers on their way to their various places of work, were forced to clear out of the road as police siren announced the approach of the man about to die.
It was a show of power which Mighty Joe loved and which caused his doom and as he was being led to the execution stake alongside his sidekick, Bashiru Fatola, a former soldier, the crowd erupted in joy. Another Bar Beach spectacle was about to happen.
As he took his final walk, Mighty Joe was garbed in a white short sleeve shirt and brown trousers while Fatola wore a yellow flowing dress.
Mighty Joe’s famous last words after he was tied to the stakes were:  “May God bless everybody, both my friends and my enemies. Tell my wife, my mother and my in-law to keep fit”. He was then silenced by a hail of bullets, shattering his earthly body.
Source: Legit.ng, Ourpage9ja.