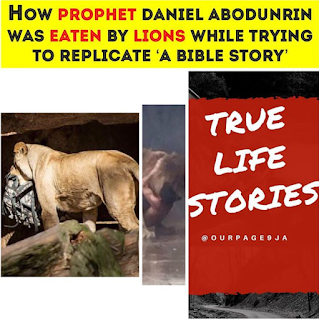 One of the most famous the University of Ibadan is its Zoological Garden, which is one of the oldest in the country. The Zoo plays host to various animals but the most legendary of them all are the lions.
For many visitors, a trio to the famed Zoo is not complete without seeing the majestic lions. During the Easter Season of 1991, all of Ibadan was buzzing with excitement of the season and one of the spots of attraction was the University of Ibadan Zoo.
Unknown to all the other visitors, there was one particular visitor who had another sinister agenda. Bishop ‘Daniel’ Abodunrin’s intention that fateful day was not to see the lions and take some memorable pictures with them. His goal was to demonstrate something that had never happened before. His plan was to replicate what was written in the Holy Bible thousands of years ago. It was the story of a Jew who was captured by King Nebuchadnezzer of Babylon who served in the King’s court until the time of Cyrus, the Persian.
Pastor (or Bishop by some people) Abodunrin, donned in a flowing red robe and clutching his Holy Bible, made his way for the lion enclosure. Alarmed zoo keepers shouted and warned him (Some other records stated that he sneaked in and it all happened very fast while another version has it that he managed to convince one of the zoo keepers to allow him enter and let God demonstrate signs and wonders saying that the God of Daniel is the same yesterday, today and tomorrow).
One thing was clear: Abodunrin did not listen to any of those warning him. Families who were enjoying their picnic looked on with bewildering mixture of shock and terror, screams rented the serene atmosphere of the zoo but Abodunrin was just chanting Bible verses at the top of his voice and speaking in tongues. He made it into the enclosure of the lions and stared at them and the lions stared back at him.
Devout Christians in the crowd were waiting to see a faith-enhancing miracle while some others toughened their minds for the bloodiest drama of the century.
Driven by the zeal and passion of religion and the utmost belief that he would be saved by the Holy Spirit or that the angels will paralyze the lions as they did for Daniel, Abodunrin did not stop chanting Bible verses and speaking in tongues, wriggling his body under the robes, providing what was the spectacle of the year for everyone in the zoo.
A crowd had gathered but inside the den of lions, something interesting was going on with the Nigerian Daniel and the feline beasts. As Abodunrin approached them, the big cats retreated and moved towards a corner of their cage, that was their instincts. They withdrew from the ‘man of God’.
At that moment, everyone was watching the entire drama. Here was a man in flowing red robe, armed with nothing but large a Bible, approaching some of the fiercest creatures on earth. When Abodunrin jumped into the lions’ cage, the lions moved into a tense retreat. Abodunrin stepped closer.
He brushed off those who warned him of an imminent danger that they had carnal minds and could not understand things of the spirit. Rational people in the audience looked on in horror as it looked like a feast was ready for the lions. He might have mistaken the retreat of the lions for weakness. He kept on chanting Bible verses, making gestures at the lions and commanding them to be still. He was calling on the God of Daniel who saved the prophet in Babylon to show awesome power.
As he made a final approach towards the lions, the lions lifted their massive bodies and charged at Abodunrin in a flash. The Bible flew away and he landed with a thud. A bitter struggle ensued and it seemed everyone was so confused to do anything
In a matter of seconds, he was torn to shreds.  He died on the spot and the lions snacked on his remains. Abodunrin’s robe was redder with the splatter of his blood all over the place, his torn bible in one corner of the cage.
What remained of the audacious preacher was later recovered.
In an instant, the story was all over the country that a pastor who entered the lion’s den was mauled to death and consumed by the beasts.
Source: Abiyamo