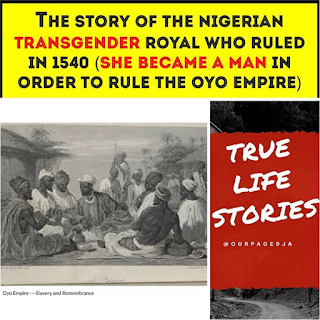 Referred as to as the first female king of Oyo Empire, Orompotoniyun had to do this to secure the rightful place on the throne after her father’s death, as a woman was never allowed to become an Alaafin (supreme overlord) to rule over men.
Her late father Alaafin Ofinran was then living in a strange land, called Bariba. He and his people decided to return to Oyo after his father, Alaafin Onigbogi passed away.
Ofinran began the journey with his daughter, Orompotoniyun, and his sons, Ajiboyede and Eguguoju.
When Ofinran died, Prince Eguguoju became the Alaafin. They settled in Oyo-Igboho, where Alaafin Ofinran was buried. Prince Eguguoju, however, passed away.
With his demise, the next to take over the throne was Prince Ajiboyede but he was too young to become a King. Prince Tella, who was also born on the way to Oyo, was just a toddler so he was not considered.
Princess Oromootoniyun was the only link to the Alaafin dynasty, but since it was forbidden for a woman to rule the empire, the chiefs and elders started making plots on how to install themselves as kings.
The strong-willed Orompotoniyun was, however, not going to let that happen. Ready to defend her family rights that were divinely ordained, she summoned the chiefs and asked them to start preparing for her coronation but they refused, saying that a female could never be king. Orompotoniyun, still determined told them that she was ready to prove to that she was a man and not a woman.
Thinking they could ridicule her, the chiefs agreed, on the condition that she appeared stark naked at the palace in 7 days. Before that meeting, Orompotoniyun started wearing male clothing. On the said day of the meeting, which the whole Yoruba land were looking forward to, Orompotoniyun mounted the podium and first removed her cap to show her barbed hair. She also showed off her chest, but the council of chiefs was still not pleased. She finally removed her trousers to the shock of many, according to accounts, they not only saw a penis, they also saw a scrotum sack drooping with two scrotum eggs in the sack.
At once, everyone dropped on their chest in prostration and she got enthroned as Alaafin Orompotoniyun.
Orompotoniyun came to be popularly known as Ajiun, the custodian of the vagina that kills evil plots.
Orompotoniyun ruled with so much success and won many wars and kept Igboho very safe and secured. The king built a wall around Igboho which can still be seen till now.
Such was the story of Orompotoniyun, the greatest transgender who turned herself to a man within 7 days.
Some would say it is a myth, and others, demonic powers. 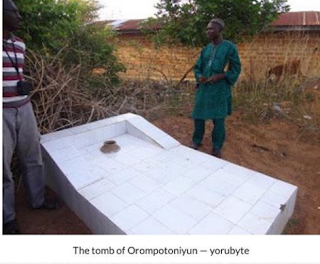