True Life Stories: The Tragic Story of the Igbo Slaves 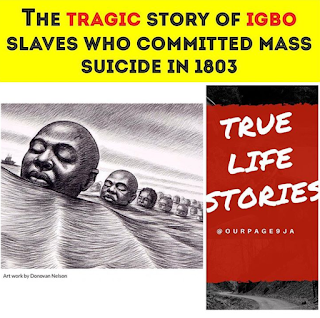 In 1803, one of the largest mass suicides of enslaved people took place when Igbo captives from what is now Nigeria were taken to Georgia coast. In May 1803, the Igbo and other West African captives arrived in Savannah, Georgia, on the slave ship ‘The Wanderer’.
They were purchased for an average of $100 each by slave merchants John Couper and Thomas Spalding to be resold to plantations on nearby St. Simons Island. The chained slaves were packed under deck of a coastal vessel, The York, which would take them to St. Simons.
During the voyage, approximately 75 Igbo slaves rose in rebellion, took control of the ship drowned their captors, and in the process, caused the grounding of the ship in Dunbar Creek.
The sequence of events that occurred next remains unclear. It is known only the Igbo marched ashore singing led by their high chief. Then at his direction, they walked into the marshy waters of Dunbar Creek, committing suicide.
Roswell King, a white overseer on the nearby Pierce Butler plantation, wrote the first account of the incident. He and another man identified only as Captain Patterson recovered many of the drowned bodies.
Apparently, only a subset of the 75 Igbo rebels was drowned. Thirteen bodies were recovered, but others remained missing and some may have survived the suicide episode, making the actual number of the deaths uncertain.
Regardless of the numbers, the deaths signaled a powerful story of resistance as these captives overwhelmed their captors in a strange land, and many took their own lives rather than remain enslaved in the New World.
The Igbo Landing gradually took on enormous symbolic importance in local African American folklore. The mutiny and subsequent suicide by the Igbo people was called by many locals as the first freedom march in the history of the United States.
Local people claimed that the Landing and surrounding marshes in Dunbar Creek where the Igbo people committed suicide in 1803 were haunted by the souls of the dead Igbo slaves. The story of the Igbo slaves, who chose death over slavery which had long been part of Gullah Folklore, was finally recorded from various oral sources in the 1930s by members of the Federal Writers Projects.
While many historians for centuries have cast doubt on the Igbo landing mass suicide suggesting that the entire incident was more legend than fact, the accounts Roswell King and others provided at that time were verified by post-1980 research which used modern scientific techniques to reconstruct the episode and confirm the factual basis of the longstanding oral accounts.
In the wildly acclaimed marvel comic film Black Panther Killmonger played by actor Michael B Jordan refers to this event, saying, “Bury me in the ocean with my ancestors who jumped from ships, ‘cause they knew death was better than bondage”. 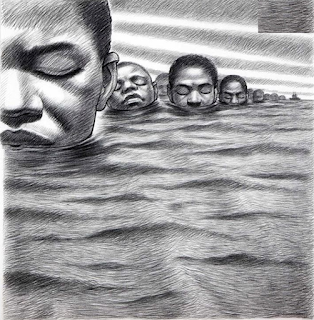 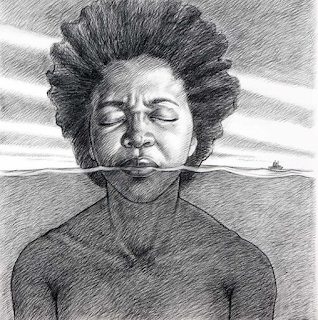