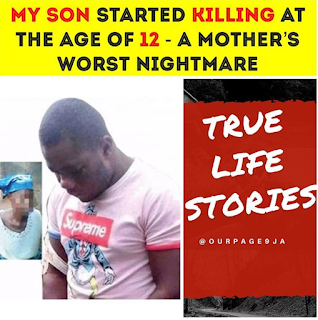 Henry Onyekachi Chibueze, also known as Vampire according to security sources, invokes fear in the hearts of families of victims who have heard gory details of his blood chilling operations and often parts with huge sums of money without informing security agents.
Not a few of his victims believe that the name “Vampire” aptly depicted his huge appetite for bloodletting and violence. Giving dreadful details of his criminal activities in five years of operation while being paraded, Vampire said that he had lost count of the victims he had killed for failure to pay up the ransom or for getting security details involved.
Before his death, he particularly recounted how he killed his girlfriend, Sandra, who he said absconded with his 45million Naira. In his words: ‘Yes I shot my girlfriend and everybody in their house because she stole my 45million Naira which I kept in my house. I went to her family house in Lagos and when she saw me coming, she ran into the house. I went in and shot her and everybody in the room. She died instantly but I don’t know how others died.’
‘I started kidnapping in the year 2000 and I joined the business because my people did not train me. The people that taught me the job have all been killed. I am from a polygamous family in Nwangele Local Government Area of Imo State.’ Vampire who said he lived in Abidjan with his wife and daughter averred that his wife had no idea that he was a kidnapper.
‘My wife still thinks I buy and sell fabrics from Ghana which I was doing when I met her. Under the circumstances, I do not know if she is aware that I have been arrested’, he said.
The distraught mother, Mrs. Beatrice Chibueze described him as an evil child, who had always acted like someone possessed by agwu(Evil Spirit).
The Vampire was gunned down at Umuowa bush in Ikwerre L.G.A of Rivers State by a combination of Inspector General of Police Special Response Unit from the Rivers State Police Command and Imo State Police Command.
Vampire’s mother told the Sun that her son had committed his first murder when he was just 12 years old during a fight with his fellow pupil, while still in primary five at Umuokpu Community Primary School, in Abaja. It was the incident that ended his formal education in primary five after the murder incident for which his late father had to pay compensation to the family of the victim. Vampire was said to have refused learning any trade, but rather joined some undesirable elements called ‘Hunters’ from the neighbouring community who smoked marijuana and engaged in stealing people’s goats and fowls, which they either sold or killed and ate.
Mrs. Chibueze disclosed that the deadly criminal later started a commercial motorcycle business on a hire purchase basis, operating around Isu and Anara in Isi-Ala Mbano mostly at night, returning in the early hours of the morning.
According to his mother, though their family is a polygamous one, her late husband had ensured that all his children were educated but he refused to be useful like his siblings.
Source: Ourpage9ja.