UN International Day of Living Together in Peace

May 16, 2019Uncategorized by NaijaMemoirsLeave a Comment on UN International Day of Living Together in Peace 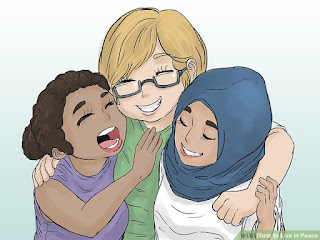 Living together in peace is all about accepting differences and having the ability to listen to, recognize, respect and appreciate others, as well as living in a peaceful and united way.
The UN General-Assembly, in its resolution 72/130, declared 16 May the International Day of Living Together in Peace, as a means of regularly mobilizing the efforts of the international community to promote peace, tolerance, inclusion, understanding and solidarity. The Day aims to uphold the desire to live and act together, united in differences and diversity, in order to build a sustainable world of peace, solidarity and harmony.
The Day invites countries to further promote reconciliation to help to ensure peace and sustainable development, including by working with communities, faith leaders and other relevant actors, through re conciliatory measures and acts of service and by encouraging forgiveness and compassion among individuals.
Background
Following the devastation of the Second World War, the United Nations was established to save succeeding generations from the scourge of war. One of its purposes is to achieve international cooperation in solving international problems, including by promoting and encouraging respect for human rights and for fundamental freedoms for all without distinction as to race, sex, language or religion.
In 1997, the General-Assembly proclaimed – by its resolution 52/15 — the year 2000 as the “International Year for a Culture of Peace”. In 1998, it proclaimed the period 2001-2010 as the “International Decade for a Culture of Peace and Non-Violence for Children of the World.”
In 1999, The General-Assembly adopted, by resolution 53/243, the Declaration and Programme of Action on a Culture of Peace, which serves as the universal mandate for the international community, particularly the United Nations system, to promote a culture of peace and non-violence that benefits all of humanity, including future generations.
The declaration came about as a result of the long-held and cherished concept — contained within the Constitution of UNESCO — that “since wars begin in the minds of men, it is in the minds of men that the defenses of peace must be constructed.” The Declaration embraces the principle that peace is not merely the absence of conflict, but also requires a positive, dynamic participatory process, in which dialogue is encouraged and conflicts are resolved in a spirit of mutual understanding and cooperation.
The Declaration also recognizes that to fulfill such an aspiration, there is a need to eliminate all forms of discrimination and intolerance, including those based on race, color, sex, language, religion, political or other opinion, national, ethnic or social origin, property, disability, birth or other status.
*Heal the World by Michael Jackson and Lets Live Together by KUSH always comes to my mind when i think about peace.*
Lets all join hands to make the World a better place.
Culled from www.un.org
Photo Cred: WikiHow